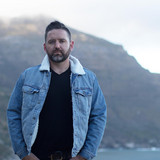 South African artist Jack Atlantic is set to launch with a highly touted debut album Repaired (18/09) produced by critically acclaimed SAMA (South African Music Award) winning South African musician and producer Mark Beling (Mean Mr Mustard / Blackbyrd/ Prime Circle/ Louise Carver). Atlantic’s debut single Over And Over leads the charge from the 11th of September 2020, an expertly produced, and soulfully delivered slice of outstanding “acousti-pop”. Over and Over is based on a letter from a World War II soldier to his beloved written on the same day as the singles release 75 years earlier in 1945. Over and Over is not a song about casual love or hooking up but instead explores commitment and falling in love with the same person over and over again. This might be Atlantic’s debut single and album but he is by no means new to the music industry. Originally performing under the name CherryKab, Atlantic found success with hit songs, ‘Head Over Heels’ and ‘We Got The Power’, which charted on all major radio stations in SA . Released by Just Music, Over and Over is now available for streaming and download.