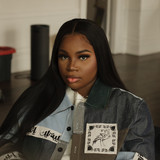 Toronto-based artist and songwriter Savannah Ré has become one of R&B’s brightest new voices by making music with an unyielding intention: to craft songs that forfeit polished stories for authentic ones. As a highly skilled songwriter, she’s developed an acumen for an arrestingly honest style of self-reflection that’s the mark of music’s elite. Delivered with honey-hued vocals, and sung over patient, golden melodies with heady, circular beats, her music is mesmerizing in its celestial fluidity as it defers space for her voice to take centre stage.   It’s this carefully-refined formula for songwriting that has brought Savannah Ré under the mentorship of Grammy Award-winning producer Boi-1da and has made her the go-to collaborator for R&B’s upper echelon where she’s written with artists like Babyface, Normani and Wondagurl. In addition to opening for artists like TLC and Jessie Reyez on her Being Human On Tour 30-date North American tour, Savannah Ré has also attended esteemed writing camps including the Keep Cool/ RCA writing camp and Amazon’s all-woman creative camp for Wondagurl's debut album. In 2019, her single “Best Is Yet To Come” was selected as one of the 100 Best Songs of the Year by Apple Music.