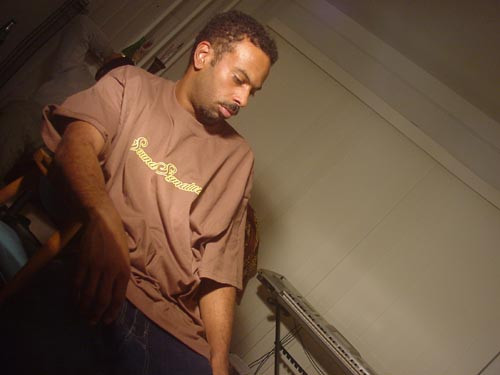 Detroit resident Theo Parrish is equally revered for his intense, genre-spanning DJ sets, his unconventional yet deeply soulful house productions, and his crucial Sound Signature record label. Directly inspired by pioneering Chicago house DJs such as Ron Hardy and Frankie Knuckles, his loud, EQ-busy club sets focus on timeless music rather than the latest trends, exuberantly mixing classics and obscurities from disco, jazz, and soul to new wave and house, generally played off crackly old vinyl. His early releases, such as 1998 debut full-length First Floor weaved these influences into slow-burning, immersive grooves that gradually reveal deeper levels of detail the longer one listens. From there, his music became more elaborate and ambitious, from his work with collaborative projects 3 Chairs and the Rotating Assembly collective to expansive solo full-lengths like 2014's American Intelligence and 2020's Wuddaji, based on live playing rather than samples. Theo Parrish was born in Washington, D.C., but grew up in Chicago, listening to artists such as Miles Davis, Jimi Hendrix, and Nina Simone. He was exposed to the early house scene during the 1980s, and began making music and spinning records at the age of 13. He graduated from the Chicago Academy of the Arts, then studied at the Kansas City Art Institute, where he developed sound sculptures, incorporating live instruments, the human voice, and looped recordings -- a process that would inform his future work. After graduating from KCAI in 1994, he moved to Detroit and became highly active within the city's music scene. His track "Lake Shore Drive" appeared on the B-side of a Moodymann (Kenny Dixon, Jr.) 12" in 1995, and his first solo release was the Baby Steps EP on Elevate in 1996. Parrish launched Sound Signature in 1997 and released a slew of well-received singles that year, including Moonlight Music & You and Took Me All the Way Back (on KDJ). He also began working with Dixon and Rick Wilhite as 3 Chairs, releasing a double EP containing solo tracks by each producer, with a sequel appearing the following year. Peacefrog released his debut full-length, First Floor, in 1998, as a CD or two separate double-vinyl packages. Additional EPs such as Pieces of a Paradox and Essential Selections, Vol. 1 (with Marcellus Pittman) appeared on Sound Signature, and Parrish began releasing excerpts from his infamous DJ sets as a series of informal mixtapes and CD-Rs. Following a compilation of earlier singles titled Sound Signature Sounds, Parrish's second full-length, Parallel Dimensions, appeared on his label in 2000, with major differences between the CD and double-vinyl configurations. Both sold out immediately, and the CD track list was given a wider issue by Ubiquity four years later. Parrish continued his prolific string of singles, including 2002's Solitary Flight and the Sun Ra tribute "Saga of Resistance," as well as his white-label Ugly Edits series. He also headed the Rotating Assembly, a collective of live musicians and singers, who released an initial single in 2003 and full-length Natural Aspirations the following year. 3 Chairs also remained active, additionally including Pittman, and with all of the producers working together rather than individually. Their 2004 full-length included additional guests such as Amp Fiddler, Norma Jean Bell, and Andrés. Carl Craig's remix of Parrish's "Falling Up" (originally from a 2002 survey of Detroit's beatdown scene) appeared in 2005 and became one of the biggest underground house tracks of the decade. Parrish's sprawling Sound Sculptures, Vol. 1 appeared early in 2007, and Et Tu Brute, a collaboration with funk musician and Rotating Assembly member Duminie DePorres, was released by the Underground Resistance-affiliated Submerge Recordings later in the year. An Adidas-sponsored short film about Parrish and the Detroit music scene appeared in 2008; "Something About Detroit," his track composed for the film, was pressed to vinyl the following year. 3 Chairs' CD compilation Spectrum was released in 2009, and Parrish's Sketches full-length arrived in 2010. Uget, a limited double-CD compiling the Ugly Edits series, appeared in 2011, and Sound Signature Sounds, Vol. 2 was released in 2012, as Parrish continued putting out singles and EPs on his own label and others such as Running Back (Hand Made) and Wildheart Recordings ("Days Like This," a 2013 collaboration with Afro-beat drummer Tony Allen). In 2013, the artist released Theo Parrish's Black Jazz Signature, a selection of highlights from the back catalog of Black Jazz Records. The double-CD/triple-LP American Intelligence was released in 2014, and a series of Gentrified Love singles, including guests like Waajeed and Paul Randolph, was launched in 2016. Wuddaji, a more stripped-down set of rhythmic explorations than some of Parrish's previous albums, appeared in 2020. ~ Paul Simpson, Rovi