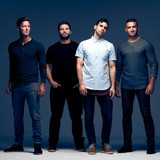 Pluto Revolts is an exercise in resilience, even as far as interpreting "death and rebirth" from its astrological namesake. The project was originally established as a solo experiment to find new inspiration for singer Benjamin James, after splitting from his previous band when their quarter-million dollar album was shelved on a now-defunct major label. In his hometown of Cincinnati, Ohio, years of writing and performing under this pseudonym resulted in crafting a sound that thrives on avoiding genre pigeon-holes. Ultimately, these ideals attracted more like-minded musicians to join him and, once again, a full-band experience emerged on stage, as well as in the studio. The legacy James solidified with each new effort from the band is that of promoting one singular message: never give up in the pursuit of your dreams, even if that means embracing reinvention. According to music journalist Mike Breen, the style of Pluto Revolts can be described as combining "Alternative Rock attitude with Electronic experimentation for a familiar, yet fresh sound. James' yearning vocals are powerful, at times stadium-Rock strong and other times Pop-ballad sweet...which play well with the energetic guitar, crashing drums and playful keys." The latest EP, Tidal Wave, contains "deftly designed structures and striking melodic magnetism" and "a sound as accomplished, passionate and effectual as any Indie/Electro/Pop act on the market" (Mike Breen, Citybeat Dec 2016).