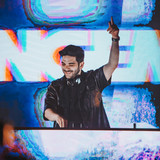 ANGEMI, a name that is quite popular amongst the EDM scene with releasing on labels such as Spinnin’ Records, Wall Recordings, Smash the House, Armada Music, Revealed Recordings and many more. An Italian DJ/Producer with over eleven years in the industry, he has shown his ability to produce multiple genres through his “what if” series on Facebook which put him in the spotlight and impressed artists such as Dimitri Vegas & Like Mike which have taken ANGEMI under their wing. From his career progression, he has played at Boom Tomorrowland on the main-stage, Garden of Madness in Ibiza, Antwerp and Liverpool. ANGEMI has also played at World Club Dome in Germany, Medusa Spain on main-stage, cream fields UK and on the other side of the world, Medusa México; more recently - EDC México 2019 on the main-stage, Ultra Music Festival Miami and Sunburn Arena. ANGEMI even played at one of the greatest clubs in Europe - Bootshaus. Musical wise, ANGEMI has collaborated with top tier DJs such as Timmy Trumpet, Mariana BO, KURA and many more. On top of that, he has official remixes with the legend, Armin Van Buuren and others such as Lost Frequencies, Thomas Gold, Afrojack and Borgeous. ANGEMI has shown his ability to produce and release Big Room, EDM Pop, Psytrance, Hardstyle, Brasilian Bass, Festival Future Bass and his signature sound, Italian Bass. From an impressive start to his career in the music industry already, ANGEMI will be a name that everyone will be hearing soon.