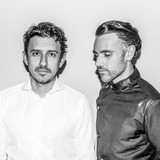 Fatum (Latin for “Fate”) is an American EDM production trio comprised of Daniel Davis, Bruce Karlsson & Chad Newbold. Their combined accolades consist of two Grammy nominations, over twenty #1 Billboard Dance charting remixes & singles, decades international touring experience, and vast network of with the world’s biggest DJ’s and record labels, and winners of the best EDM category at the Hollywood Music In Media awards. Within their first 12 months of working together, Fatum received a Grammy nomination for their remix of Jes’ “Hold On”. This nomination quickly generated a huge demand for Fatum’s signature sound, which immediately launched their brand to marquee status around the world. Since then, Fatum has released over forty singles and remixes on dance music’s fan’s favorite labels such as Ultra, Big Beat, Anjunabeats, Armada, Black Hole, Ride, & earned DJ support from the likes of David Guetta, The Chainsmokers, Calvin Harris, Armin van Buuren, Tiesto, Above & Beyond, Paul Oakenfold, and many more. All of these accolades and their peak time sound now has Fatum as one of dance music’s most exciting acts with no ceiling for them in sight.

With two 5 track EPs to be released on Armada and a variety of other originals and remixes on a multitude of major dance labels, Fatum’s future is looking bright. The group has also joined forces with CAA’s Hunter Williams where he plans to propel Fatum with upcoming branded worldwide tours for years to come.