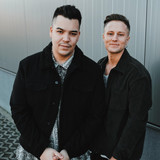 For this duo when it comes to where to do a show, there is not much point to debate over in which room of the party they belong - in techno terms there are the two places; the ones you tend to call either the “big room” or the “main stage”. These two relatively young newcomers have in very short time managed to build up a large and loyal following that continuously keeps growing with each year since their start in 2014. Hailing from Stuttgart, Germany they together run the label From Another Mind that came into existence in 2015 from the party they started one year earlier. Marco and Luigi decided upon the From Another Mind name when they realised they had a different idea of how they wanted to program a party, and then later on the label. From Another Mind holds four releases from the boys to date. One of the standout releases from the FAM catalogue is the EP titled “Die Weiße Rose”, the four tracker 12” was especially well received by critics and audience alike, catapulting Marco and Luigi to the next level of their career. SHDW & Obscure Shape’s music is created from an eager music enthusiasts mind, it is techno made for the listener to go bang. The style of the duo’s productions has a clear no-nonsense vibe, inspired by a lot of old records they have sourced through the years, mainly from the late 1990’s and early 2000’s. They both show off great skill when it comes to combining these varied styles, such as classic Detroit techno, rave, EBM and acid.