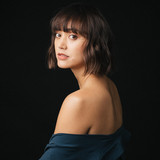 Dia is most known for her collaborations with Illenium, Grammy-nominated EDM legends The Crystal Method, and acclaimed film composer Joseph Trapanese (Tron, Oblivion, Insurgent). She has co-written and featured on singles for some of the most respected musicians in the scene, ranging from Kaskade to M83, Jason Ross, Watsky, Witt Lowry, Lindsey Stirling and more.

She is also a platinum-selling solo artist in Asia and one half of the duo, Meg and Dia.