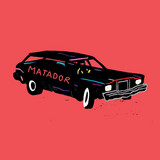 Minta & The Brook Trout make music in Lisbon, Portugal. Part of a generation of Portuguese musicians with the healthy habit of playing in each other’s bands as well as with other artists, like fellow Lisboans You Can’t Win Charlie Brown or Julie & The Carjackers, which came about at around the same time, Minta & The Brook Trout have played all over the country, from house shows to major festivals, and occasional shows in other parts of Europe, having also played in Japan and the US. their latest records have been released by independent record labels in the US and are currently being distributed in Japan by Disk Union. The band's formation is not stable: since coming up with the name, in 2009, the ever-changing line up of extremely talented Lisbon-based band members and guest musicians play songs written by Francisca Cortesão – Minta herself – and coaxed into shape by Mariana Ricardo, who has produced all of the band’s recordings. Following Slow (2016) and its companion Row EP (2017), the band is currently working on new music, to be released in early 2021. The yet-untitled album will join Slow, Olympia and the self-titled 2009 release Minta & The Brook Trout as the fourth LP in the band’s discography, which also includes a live album made with friends on a cold December night in 2010 (Carnide, 2010), and a covers EP of songs Out Of Washington State (2013).