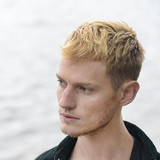 Cedric Vermue is a Dutch composer and a producer of neo-classical music. His work is stylized by a blend of classical styles and instruments, mostly piano and strings, combined with contemporary electronic elements. The music’s aesthetics are strongly based upon the principle of stillness, bringing a quieting calm in a world full of turmoil. Working with various textures and layers combined with intimately recorded acoustic elements, the music becomes a carefully crafted landscape. This welcomes any listener to submerge into a poetic universe of sound. His most recent interests include various analog synths, organ and Gregorian chant. Born in a small town in the Netherlands, Cedric began playing the piano at the age of 8. Six years later he was writing his own pieces and uploading them to YouTube, reaching thousands of plays and getting commisioned for various film scoring projects. While studying at Utrecht Conservatory of Music, he began incorporating electronics, strings and ambiences within his music. This exploration culminated into his graduation project, collaborating with six string players, making live recordings in the concert hall of the Conservatory. This project was self-released in 2018 as an EP, Ember. After graduation he started a studio project, producing two albums, in association with various string players and producer Antal van Nie. Cedric’s debut album, Left Upon Us, will be released in 2019 by Piano & Coffee Records.