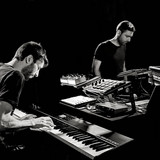 Sitting down for the first time in front of a black piano makes you feel very small, intimidated, before taming the object, its mechanics, and being carried away by its power. Philippe Larvor and Nicolas Garnier share this childhood memory of what will soon become their favorite instrument. No classical music school, but a true gluttony for the black and white keys. Pianos, synthesizers, samplers, will always be present in the series of musical shocks that the two musicians lived, discovering over the years the albums of Jean-Michel Jarre and John Williams, then Depeche Mode, Sigur Ros, and more recently Matmos and Max Richter. Shocks are often mentioned in Piano Noir. The one between two songwritings, acoustic and electronic. Those into the piano that is struck, sampled, destructured, and modified, to create new sound spaces. Those from movie pictures and atmospheric tv series that often inspire the two acolytes. In March 2017, on the occasion of the Piano Day initiated by Nils Frahm, Piano Noir takes its marks with a Radiohead cover, "Burn the witch". A first experience for the duet that defines his musical environment. The first EP was released in 2017, followed by PARAZA in 2019.