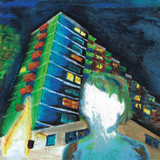 Rotterdam’s rousing Rats On Rafts, currently comprised of David Fagan, Arnoud Verheul, Natasha van Waardenburg and Mathijs Burgler, joined Fire Records in the latter half of 2015. Following the release of second album ‘Tape Hiss’ in October 2015, Rats On Rafts returned in 2016 with new single “Some Velvet Morning” and spring tour that saw them share the stage with Pere Ubu at London’s Tufnell Park Dome and supporting Mission of Burma on a host of European dates. In 2016 the band released a collaborative album with Dutch underground punk / brass ensemble De Kift – a playful re-visioning of each other’s music which began at Metropolis Festival in 2013. The record brings together songs from Rats On Rafts critically acclaimed second album ‘Tape Hiss’ and De Kift’s huge catalogue. The two bands locked themselves up for a month to record a completely analogue album. Known for their explosive live performances, they have toured across Europe and performed at festivals including Glastonbury, Eurosonic and Le Guess Who. In 2019 they joined friends and collaborators Franz Ferdinand on tour in Japan, playing to huge arenas across the country. 2021 will see the band release their long awaited third album. If ‘Tape Hiss’ was their very own sketch of a sketch for an incomplete concept album, a noisy reaction to their previous life, then it’s follow up is the realisation of their transition from punk-spiked-pop to psyche-pop protagonists.