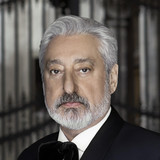 Ebi (Ebrahim Hamedi) was born in 1949 in Tehran. In his early life he and some of his friends founded a band called Sun Boys. They performed a couple of old Iranian songs for audiences. Leaving Sun Boys was simultaneous with his acquaintance to Shahram and Sahbal Shabpare. Ebi joined Shaharam and Shabal and two other young musicians to form the early five-member Black Cats. They continued to play at Kochini Club, which was one the most famous night clubs in Tehran. A few years later, Ebi left the band to start his solo career. Ebi is one of the most beloved artists in Iranian contemporary music. He owes this success to his warm and almost long-ranged baritone voice as well as outstanding ballads and political songs performed. The first three songs recorded by Ebi were "Thirst," "Why?," and "Night," the latter with lyrics by Ardalan Sarafraz and music by Mansour Iran Nejad which made Ebi very famous. He performed this song live in a TV show called Silver Clove again. As Ebi himself has said, this live performance was a launching pad to the charts. Before 1979's Islamic revolution, Ebi recorded six albums, some of which have songs that are still on the wish list of most Iranian youth. In some sense, these six albums are collection of soundtracks Ebi recorded for several movies as well as his singles performed up to that time. After the Islamic revolution of Iran in 1979, a few Iranian artists stayed in Iran like Farhad, Maziar, and Googoosh, while many others left their own country and preferred to continue their work mostly in California. Ebi was from the later group. It is said that Ebi had left Iran two years before the Islamic revolution for going on a tour around the U.S. He never came back to Iran. In the years of being poles apart from Iran, he recorded 13 albums and had concerts in some of the most famous amphitheaters like Universal Amphitheatre, Shrine Auditorium, Greek Theatre, and Sydney Opera House. During his professional career he worked with poets like Iraj Jannati Ataee, Ardalan Sarafraz, Shahriar Ghanbari, and Homa Mirafshar, composers like Varoujan, Babak Bayat, Farid Zoland, Siavash Ghomayshi, and Estafdiar Monfared Zadeh, and labels Avang and Caltex Records. The style of Ebi's music can be classified as foreign language (Persian) adult contemporary, most of which is adored for the magic words of Iraj Jannati Ataee and Ardalan Sarafraz. In addition, Ebi recorded some songs with patriotism and political aspects. The immortal song "Everlasting Persian Gulf" from Gulf is the best of them without any doubt. 2006's Begrudging Flight, which is distributed by Avang, partly deals with some social issues like spoiled women rights. ~ Pouya Partovi, Rovi