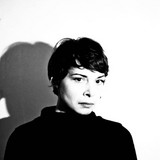 There are precedents and reference points for Melanie De Biasio’s third full-length, Lilies, but they still won’t prepare you for the experience of immersing yourself in this singular album. Listen close and you’ll hear echoes of Portishead’s wracked, beautiful, existential 21st Century blues, the bewitching, panoramic songcraft of De Biasio’s hero, Mark Hollis of Talk Talk, even the infernal bustle of Nina Simone’s Sinnerman in the restless bustle of Gold Junkies. And you *will listen close, because this understated, unsettling, unforgettable set only rewards closer listening. This music that courses from De Biasio’s lips and crackles at her fingertips comes so naturally to her, an organic thing that can barely be contained, lest its spark be diminished or snuffed out. She respects this gift, not least because of what it means to her, what it has always meant to her. Learning to play instruments as a child, she was struck by how it felt to play with other musicians, to play the same note together, an experience she says “connected me. Music was a channel for sharing. I was like, Okay, I’ve found my way to survive in this world.” At the age of 12 she joined the Ensemble de l'Harmonie de Charleroi, and studying singing at the Royal Conservatory in Brussels. Upon graduating, she undertook a month-long tour of Russia with a jazz-punk group, until the low-budget grind got the better of her. She suffered a serious pulmonary infection in Moscow, but went ahead and performed anyway, blowing out her voice. Upon returning home, her doctor prescribed a year without singing; indeed, it wasn’t clear she’d ever sing again. For lesser artists, this would be where the story ends. But this plot twist was the making of Melanie De Biasio. “I had to stop everything, I had to rebuild my voice in hospitals. It was hell,” she says. “But I learned another way to sing, another way to breathe. Losing my voice gave me a chance to discover my relationship with silence. That experience was a rebirth. I performed a first concert after my recovery, a label was interested, and my first album was recorded. Released in 2007, that first album, A Stomach Is Burning, was recorded in a lightning-fast three days. Upon its release, she toured with her small band of musicians, the concerts helping her grow as an artist, to further understand her art, and her role as artist. “When performing live, I’m not selling the ‘brand’ of Melanie De Biasio, I’m in the service of something beyond me,” she says. That need to be in the moment remains paramount – she learned to write her setlists just before the show, to react to the environment, the audience, to her feelings at that moment. She regards her shows less as improvisations, more as “instant creation”. She elected to produce her second album herself. “I had a sound in mind, and I didn’t want to compromise,” she says. “I needed time, I needed to not have deadlines. It was a very solitary process.” Three years into this quest, she felt stymied. She began working in prisons, helping prisoners explore their creativity, using voice, movement, breath and rhythm. “It was a breakthrough,” she remembers. “I was trying to get them to connect to ‘the pulse’ – how your body breathes, how you connect. To follow their own impulse. And I realised, I had to be honest with myself, and though would recognise I am being sincere to my own experience. So I focused on my sense of joy or my absence of joy in each moment. It was a great discovery for me.” Her second album, No Deal, followed after this breakthrough in 2013, to widespread acclaim, marking De Biasio’s first release in the UK, where she became the first Belgian artist to appear on Jools Holland’s Later… A tour across Europe supporting Eels helped further spread the word on this remarkable artist further afield, and she was honoured with the headlining slot at the 2015 Montreux Jazz festival in Tokyo, not to mention being proclaimed the Best Live Act by Gilles Peterson and receiving his Track Of The Year award in 2016, winning the Ebba Award in Netherlands and the Champagne Price in France, along with the Octave De La Musique, D6BELS and Medaille Chevalier Wallon gongs in Belgium. At the Haldern Pop Festival in 2016, she collaborated with Damien Rice, on a spectral cover of Nina Simone’s Be My Husband, while a remix project for her No Deal album saw De Biasio’s songs reworked and re-envisioned by the likes of Cinematic Orchestra, Jonwayne, Hex and Seven Davis Jr. Still, though, she was restless, conscious of remaining in the moment. Her label encouraged De Biasio and her band to undertake a rare rehearsal session before her biggest show yet in Belgium. Reluctantly, she acceded; “Rehearsal is a challenge of, how do you explore the music without fossilising it?” she says. “Music can die so quickly, if you’re just reproducing something, if it doesn’t have the spirit of the moment, the consciousness of ‘now’.” Rather than run through her back catalogue, De Biasio had an engineer record as her band felt their way through an exploratory version of a new track she was working on, Gold Junkies. The take ran to

almost 25 minutes, but as she listened to it on headphones over and over, while on long bicycle rides, De Biasio became convinced it should be released. “I fought to have that music released,” she says, of the track that would be released, uncut, as the Blackened Cities EP. “It refreshed me, it renewed me. It left me with a feeling of freedom – that anything was possible.” So inspired, she began work on the follow-up to No Deal, her third full-length. She would rearrange her paradigm once again. “I could have gone to a big studio, made a big production,” she says, of the album that became Lilies. “But I wanted none of that. I just wanted to retreat to a cave with my laptop, my Pro-Tools, and my cheap, 100 Euro Shure SM-58 microphone, that I used on tour. I wanted to go back to the seed of creativity, with the simplest materials.” The experience was, she says, “very uncomfortable. I was in this room where there was no heat, no light, no sense of night or day at all. But I felt free. I was very happy to have this feeling of, ‘I don’t need anything more, I have everything I need here.’” The process has yielded this uncompromising, quixotic and driven artist’s finest album yet, an album that glories in the tiny details, the sense of space, the meditative minimalism, as much as it revels in her panoramic and kaleidoscopic creativity. “For me, Lilies has a darkness, but it’s also luminous,” De Biasio says, and she’s right. There’s no traditionalism at play here, but an embrace of freeness, ambition, creative sincerity, emotional power, plotting a course between Billie Holiday, Portishead, the future and a million points in between.