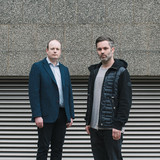 Cotton Wolf is the collective moniker of Welsh Producer Llion Robertson and classically-trained composer Seb Goldfinch. Prior to joining us, the pair have already impressed the likes of BBC Radio One and BBC Radio 6 Music with previous EPs, Moxa, Cloud City and Catapelt, resulting in repeated radio plays. Embracing the conflicts between man and machine in an ever-digitising world, such tastemakers have pointed towards Massive Attack, Hans Richter and New Order as sonic reference points. Their first LP for Bubblewrap, Life In Analogue,was released on April 28th, 2017. Comprising epic classical strings, synths and minimalist vocals, it marked the culmination of nearly two years of development in the studio. Themed around the connection and disconnection found in our interactions with technology, the electronic backdrops are mediated through the pair’s deft, warming and human approach to production. The album features vocals from Alys Williams and Lois Rogers.