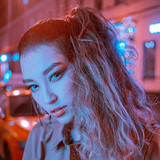 Sofi Maeda was born in Takamatsu, Japan. The alternative pop-punk starlet has been doing music seriously since 2016. She has released the album “You Know Me Well” in 2017 and has followed up with a series of successful singles. She has won singing as well as song contests, and has performed on the Red Square in Moscow, at the festival in Gorky Park, as well as concerts in Depo, Live Stars, San Diego, Glastonbury and many more. This year Sofi has dropped 3 singles so far, including “ASHITA”. If you like Sofi Maeda then you should already have “ASHITA” on your playlist. If on the other hand you have never heard of her, and like artists who come to the mic with their own creative style then I recommend you give this a listen, you may be pleasantly surprised. This is Sofi’s most exiting, tuneful, and interesting track yet. Hard, soft, fast, slow, aggressive, empowering – it’s superb from start to finish!