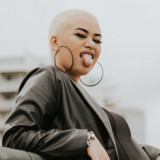 A.GIRL is the family nickname given to 21 year old artist Hinenuiterangi Tairua. After the release of just three tracks she won Next Big Thing at the FBi Awards, won triple j Unearthed’s festival slot at Listen Out, was tipped as a rising star by UK’s Wonderland Mag and one to watch by Ticketmaster. Raised in Western Sydney, A.GIRL calls Australia home but the connection to her family’s Maori homeland of Te Hapua in New Zealand runs deep. A.GIRL’s sound is rooted in r&b & soul with an effortless vocal flow and soulful sing-rap style. More recently she has flexed her rap skills with acclaimed feature performances on triple j’s Like A Version, triple j's Bars Of Steel, and Red Bull 64 Bars.