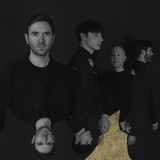 Zola Blood release their latest EP ‘Two Hearts’ via Akira Records. Following on from the release of their widely acclaimed debut album, ‘Infinite Games’ in 2017, East London based quartet, Zola Blood have been quietly working on new material in their Hackney-based studio. Resulting in a body of songs that channel intricate arrangements alongside a more direct and powerful sound. Since the album release, they’ve amassed over 60 million streams, testament to the depth, density and trance like quality both the song writing and production the 4-piece expertly channel. In addition to the full EP, the band release an official music video for ‘Silver Soul’. “There have been some big changes for all of us since ‘Infinite Games’; some of us have had kids and the world around us has become pretty messed up in that time. Lyrically the EP reflects ideas of change and impermanence, whether that's related to a relationship or a time or place that you've moved on from. Most of the tracks play on that idea, or a particular event that's really jolted us into thinking about the past. We talked about waiting a while and writing another album, but as we’d taken some time off it felt right to get these tracks out as an EP, and we're writing the album now. Sonically we knew we wanted to make something bolder and we were always thinking about how the tracks would translate live''