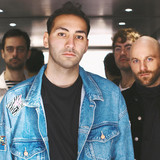 Fond of Rudy are an Indie Pop 4 piece formed in London/Brighton. Their songs are washed with stylistic references from 80s icons and revived to a state of modernity through contemporary production. The band started to develop with Matt (vocals) and Ross (Guitar) creating demos in an old garage in Brighton. Martin (Producer) took note of what the demos were trying to achieve and helped spark the evolution of Fond of Rudy's sound. Otto (Bass and synth) and Si (Drums) joined shortly afterwards, bringing a wealth of experience and contemporary pop/rock influence completing the line up moving up towards London in the process. With support on a string of singles from the likes of BBC Radio 6, BBC Introducing London, CLASH Music and Wonderland Magazine, Fond of Rudy started touring across the UK supporting Cassia, Annabel Allum, Only Sun, Clean Cut Kid, embracing the bands rise helped them to secure a slot at Canadian Music Week and embark on a mini tour of North America. Further success followed in 2020 with their single 'Imagination' being featured on the highly popular Japanese reality television show 'Terrace House' and securing placement on their first editorial playlist on Spotify. Fond of Rudy's epic and hooked filled Alternative Indie Pop has generated an influx of new followers attending their energetic live shows. With the release of 'Singapore' marking the drive towards a future headline tour, Fond of Rudy are set to alight ahead of a busy year in 2020.