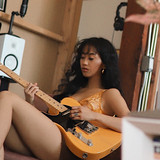 Jessica Domingo is a singer, songwriter, musician, and creative director. The Seattle native was surrounded by several instruments at a young age. She found her love for music after picking up piano and guitar as her primary outlet that naturally led her to writing songs. Raised in a household that listened to every genre, she was inspired by Norah Jones, Amy Winehouse, and Gwen Stefani. Growing up, she was the drummer for two girl bands, performed in choirs, and then later discovered her own voice through uploading singing videos on YouTube. She quickly garnered over 2 million views on her very first video. Jessica began to record in studios with original music at age 14 and after a few years of experimenting, she released 2 EP’s “Moonplay” and “Floral Mind”. Every song captures cinematic soundscapes with her sultry vocal tone and melodies, along with lyrics that unveil romance and messages about solitude, peace, healing, and growth. Earmilk premieres Jessica’s single “Island” noting her elegant vocals where her music is a reflection of alternative R&B meets soul. “The track was created in the Philippines where I felt a deep connection with my own roots”, she says. She brings a warm and tropical experience to the island infused beat, showcasing the versatility in her music. Now living in Los Angeles, she is currently enrolled in music school and in the works of self-producing and writing her upcoming projects.