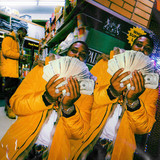 Hardo isn’t supposed be standing in the upright position he holds today. He’s lived and survived enough gangster non-fiction to make a cinematic trilogy. Yet, the 25- year-old is on the brink of becoming the next Black &amp; Yellow representative to shake up hip-hop. While Wiz Khalifa and Mac Miller share the torch to their city, Hardo is the only native artist certified and talented enough to authentically tell the good, bad and ugly story of PA’s underbelly. Hardo was born on the East side of Pittsburgh in the Wilkinsburg section. While running the streets as a teen, he learned he was also attracted to his older friend’s rapping ability. The Souljah Slim and Young Jeezy fan took a shot at penning bars and discovered a natural talent. He wasn’t the only one who noticed. Hardo’s high school classmate, Mac Miller encouraged him to take rap serious (Hardo recorded his first song at Miller’s home). But when you’re a 17-year-old owner of a new Cadillac and home, its hard to give your hobby free energy. That decision would send the 18-year-old future MC to prison for two years for selling narcotics to an undercover cop. The next several years of Hardo’s life reads like a blend of Francis Ford Coppola’s fiction and Tupac’s non-fiction. After being released from prison in October 2012, Hardo began his transition from the crime life to the rhyme life. In January of 2013, he dropped his first underground hit, “Stressin”.