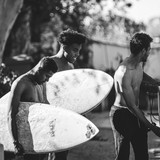 Featuring We the Commas

Southern California has long been known for its beach culture and zen lifestyle, and We the Commas is bringing a fresh perspective to its hometown mantra. The emerging San Diego-based band is comprised of three brothers: Lenny (the oldest who recently graduated college where he studied film), Jordy (the middle sibling and current psychology major at the University of San Diego) and Cam (the youngest who just graduated high school). We the Commas are changing the visual and musical narrative of what the world thinks kids from a beach town look and sound like.

Inspired by the likes of John Mayer, Bob Marley, The Beach Boys, Frank Ocean, Dave Matthews Band, Young The Giant and The Head and The Heart, We the Commas describe their music as “Surf Alternative R&B.” It’s a blend of chill acoustics that are soothing as the waves they love to surf, as well as soulful vocals that reflect various emotions -- from falling in lust to finding life’s purpose.