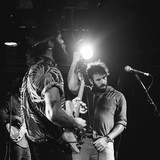 COPPERSKY is formed by three brothers that were born during Colombia’s famed, heated, and rural 80ties. They make 70ties based rock ‘n roll with a sound that is rooted in bands like Led Zeppelin, The Who, Pearl Jam, and Rival Sons, yet delivered with their own unique modern twist. The Zwart brothers moved to The Netherlands, settled in Utrecht, and found their drummer; the fourth member that completes the brotherhood and taught the Zwart’s to keep a steady pace. COPPERSKY’s third album, Orbiter iis an ode to their never ceasing, always evolving, journey as musicians and temporary travelers of the cosmos. The title also showcases their awe for everything Sci-Fi. Orbiter reveals nine strong composed rock-songs – another quality of the group – that were produced by Pablo van de Poel (lead singer and guitarist of DeWolff). Lead singer Erik Zwart, often compared vocally to Eddy Vedder and Bruce Springsteen, uses his lyrical talents to craft poetical narratives that speak to the imagination. He is sided by guitarist Marty Zwart that uses Neil Young and Pete Townshend inspired rock riffs, and bass guitarist Robert-Jan Zwart – seemingly born of a romance between John Entwistle and John Paul Jones. Backed by the adventurous thundering drums of Ray Murphy – that delivers each moment in the spirit of Keith Moon. These qualities can be heard on their third full length album, Orbiter, and during the often-improvised sweaty rock shows.