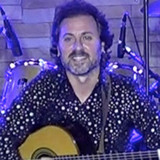 Michael Tembadis is an Eclectic and international artist origin from Italy. He has experiences like actor and songwriter, graduated in classical guitar under the guidance of M° Sandro Torlontano; has been perfected in modern singer with: Gino Vannelli, Elizabeth Sabine, Sheila Jordan, Kate Baker and Donna Mc Ellory. Since childhood shows amazement for art and especially for music, singing and imitating Bee Gees, K.C. & the Sunshine Band, Eagles and James Brown. Between 11 and 12 years old he starts singing in Bands Heavy / Rock Blues. He subsequently directs his listening and begins to love and appreciate all the great artists of all genres and music epochs of quality and class, thanks to whom he learns a lot and extends his “music-library”. During the years of study there are numerous work and training experiences in the field of music and theater. Subsequently He works in various cities in the world: Brazil, South and North Africa, Europe and Florida, USA, where He works on cruise ship, Resorts, theaters, orchestras, recording studios, including radio and television broadcasters Globe Mirante, Mediaset, Rai and many other national and international private companies. He currently promotes his albums at cultural centers for independent artists and in summer when is possible he plays on cruise ships or in Resorts; he also teaches classical guitar in middle and high schools.