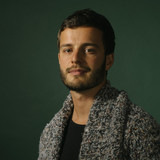 Ben van Gelder is regarded internationally as an authority on the alto saxophone. Peers and critics alike praise him for his sense of lyricism and explosive virtuosity.

Van Gelder moved to New York when he was 17 and spent almost a decade collaborating and studying with some of the most progressive artists in the world such as Mark Turner, David Binney, Nasheet Waits and Ambrose Akinmusire. He formed a quintet of forward thinking peers and recorded three critically acclaimed albums under his name. The ensemble toured extensively in Europe, Japan and the U.S. In NYC, Van Gelder established strong ties with the Jazz Gallery, a venue that fosters artistic excellence and is known as a springboard for talent. He received a much sought after commission from the institution, which resulted in his latest outing, Among Verticals. The record, inspired by a painting of abstractionist Frantisek Kupka, received 5-star reviews in press publications word wide. Van Gelder won multiple awards such as the Deloitte Jazz Award and the Gold Award granted by the National Endowment for Advancement in the Arts. Van Gelder is currently based in Amsterdam where he is on faculty at the Conservatory.