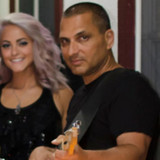 Dominic Argiro is an Independent EDM hit maker as well as singer/guitarist and songwriter creating multi layered instrumentation with unique but simple melodies that anyone can enjoy. Dominic has been recording new music for years and studied music at both Berklee College of Music as well as Five Towns Music College and has developed a heavily modern dance EDM style in addition to his own unique guitar style and melodies worked into the material.

Hailing originally from Long Island New York, Dominic spent his early years out playing and honing is performing, singing and instrumental talents and is fluent in guitar, keyboards, bass guitar and also saxophone. Dominic has been creating music for several years and built a loyal following of several thousand of social media on Sound cloud, Twitter and Spotify and has had songs played on several international and college radio outlets. He hopes to continue to expand access to his music to a new fan base and reach new markets with a long term goal of obtaining a recording contract as a performer or possibly as a songwriter. Dominic has elaborate experience as a live performer and works with and also enjoys working with other artists. Check out the attached reviewed on a popular music blog of several of Dominic’s songs stereostickman.com/reviews/dominic…ht-another-day/ Dominic has received over 3.9 million plays on Sound cloud with several thousand likes, reposts