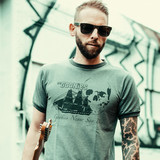 DZINTAR is the artist name of Niels Dzintar and an attempt to write, record and produce songs as a solo artist. Niels gained his musical experience as a drummer in The Maple Room and as a bass player in some other local bands. Niels graduated as a producer at Volver Sound Academy in 2015 and has now opened his very own home recording studio ‘Dzintar MusicStudio’, mainly to record his own music and other bands as well. Niels considers himself a mediocre autodidact musician as he has never taken any lessons to learn how to play any of the instruments. ‘I play it all by ear and feel, not excelling at any instrument at all but good enough to be able to translate my own ideas into music … and that suits me just fine’. The debut album ‘Alone’ is his first attempt at a solo record and the idea is to release some new music every year, not holding on to a specific genre or style. For now, thank you for listening to my music!