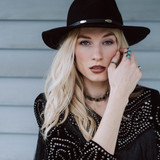 Courtney Graf is an American singer, songwriter, multi-instrumentalist and fitness model. She has been performing, writing and playing piano/guitar since she was 5. Courtney was signed to Roc Nation as a songwriter and to Wilhelmina Models prior to her move to Nashville. Courtney is passionate about writing songs that speak to empowering the self, owning your story and appreciating the push/pull on the heartstrings. She has shot campaigns for Nike, Athleta, Equinox, Reebok, etc; exercising her flexibility and dance background. Courtney aims to represent this image of strength in her music with her powerhouse vocals and vulnerable songwriting. Courtney most recently released three songs through a duo with Lamont “Logic” Coleman called Broken Halleluyah. She’s currently focused on releasing her solo album. To follow her journey, visit @grafnow on Instagram.