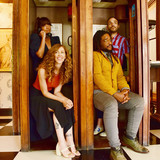 As a band, Lake Street Dive epitomizes democracy in action: the group, expanded into a quintet since touring keyboardist Akie Bermiss officially joined in 2017, share writing and arrangement duties. Their personalities, skills, and wide-ranging taste in pop, rock, R&B, and jazz have long blended together to make an impressively cohesive sound, both sophisticated and playful, combining retro influences with contemporary attitude. On its most recent Nonesuch album, 2018’s Free Yourself Up, the band even produced the record itself. Obviously is titled after the first word in the lyrics of opening track “Hypotheticals.” And it is obvious from the start that the band has homed in on Mike Elizondo’s hip-hop record- making expertise, because, on this material, the grooves run especially deep. A sense of rhythmic fun drives just about every track, from up-tempo numbers like “Hush Money” to a bittersweet slow dance like “Anymore.” The quintet fashions disarmingly cheerful arrangements guaranteed to keep the party going even as the subject matter takes a more serious turn on lead-off single, “Making Do,” about a younger generation facing a life of diminished expectations, and “Being a Woman,” a finger-snapping, bird-flipping treatise on gender inequality. “Nobody’s Stopping You Now” is a letter of encouragement from lead vocalist Rachael Price to her teenaged self, co-written with bassist Bridget Kearney.