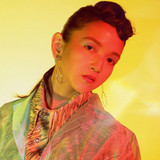 AYA Anjani is a singer-songwriter based in Jakarta, Indonesia. Determined to have a distinctive character of voice and song-writing, her fans recognize her alluring voice through numerous songs she wrote based on various musical genres.   After releasing Roman Romansa / Kucingku in 2018, she started to known as a city-pop influenced singer. Her version of Chrisye's Juwita, an Indonesian classic pop song, emphasize her character. Working with Petra Sihombing as the music producer on her upcoming EP in 2019, she released a new composition called Mutual that brings a new benchmark in her whole musical career.   AYA Anjani has always put a mellow mood in her works. While being unique in its own way, people take her songs as an intimate chat with a touch of solitude.   Instagram: https://www.instagram.com/aya_anjani_/   Youtube: https://www.youtube.com/channel/UCUMa8s1rXl9ExpHujH3POmg