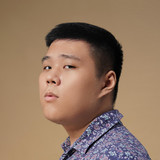 Trịnh Nhật Quang, better known as Tenkitsune, is a 23-year-old producer born and raised in Vietnam whose extensive credits include work with such groups as FOGPAK, Tiny Waves, the Tokyo-based TREKKIE TRAX, Warner Music Group, and Universal Music Group. Having taken the SoundCloud world by storm, Tenkitsune’s rise to global recognition as a prominent figure in the forward-thinking melodic electronic music scene has only just begun. With his releases like “Animal Friends” and “Kittens Express,” Tenkitsune has amassed millions of plays through various labels and promotional channels worldwide, paving the way for future bass producers everywhere. In recent years, Tenkitsune gaining media attention as a rising and upcoming star in Asia for his powerful skill in songwriting and composition. In 2019, Tenkitsune has worked with The Japan Foundation & Maltine Records to organize a tour in Vietnam that was widely known as "Bordering Practice". That same year, he has played a show at 1900 as part of Hot Panda Media, Wired Music Week Asia, and Mixmag Asia. In July 2020, Tenkitsune has written music for a Vietnamese animation and played live on stage for a one-night music concert "Red Balloon", in association with The Japan Foundation, Goethe-Institut, Institut Français, and The Onion Cellar. He has worked with many notable rising stars such as WEAN LE, KHA, WRENS EVAN, and many more to come.