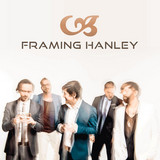 Framing Hanley are back with ENVY, their first release in 6 years. The band had released three albums prior to breaking up in 2015.