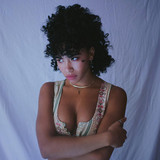 Herizen communicates truth in her music. Distilling emotional alternative, grunge distortion, hip-hop bravado, fearless experimentation, and R&B spirit into dark pop magic, she finds joy on the other side of heartbreak and unearths light from struggle. Tallying over 20 million streams independently and receiving praise from PAPER, Wonderland, and more, the singer, actress, songwriter, producer, and multi-instrumentalist explores these extremes on her 2020 upcoming EP. In between starring in Baz Luhrmann’s NETFLIX series The Get Down and USA Network’s Dare Me as well as appearing on STARZ American Gods, she crafted a singular style as an artist. It crystallized on her 2018 EP, Come over to My House. Along the way, she lent her voice to Absofacto’s “Done With Love” and What So Not’s “We Can Be Friends” in addition to contributing music to the Official Soundtrack for the Major Lazer documentary, Give Me Future. Over the last year, Herizen summoned her new EP. She co-produced every song and often performed piano and guitar.

The first single, “Hellboy” hinges on verses punctuated by raw screams, heavenly harmonies, dreamy keys, and forlorn whispers. She connects by letting this pain out and holding nothing back.