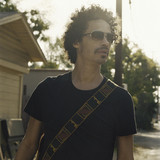 With his breakthrough American hit "Save Tonight," alternative singer/songwriter Eagle-Eye Cherry became the latest member of his family to stir the music world: his father was avant-garde jazz trumpeter Don Cherry, and his sister was alternative rap pioneer Neneh Cherry. Born in Stockholm, Sweden, in 1971, Cherry was christened Eagle-Eye (yes, his real name) because the first time he looked at his father, he did so with only one eye open. Cherry spent most of his early childhood in Sweden and on the road with his father, and at age 14, when his family moved to New York, he studied acting at the New York School of Performing Arts. He also took up the drums, playing in several bands for fun, and later played around with keyboards and songwriting. Acting remained his primary focus for the time being, though, and after school he made a living appearing in plays, commercials, and the occasional television pilot; he also guested on The Cosby Show. In the meantime, seeking more control over his own creative expression, Cherry began playing guitar and writing songs again. Don Cherry passed away in 1995, and a grief-stricken Eagle-Eye moved back to Stockholm with his girlfriend to clear his head. It was there that he began to earnestly concentrate on songwriting, and took some time to hone a set of original material modeled on the acoustic singer/songwriter tradition, with touches of blues and light funk. Deciding to try his luck in Sweden before the more competitive American marketplace, Cherry recorded his debut album, Desireless, and gave it a low-key release on the Swedish label Diesel in 1997. Gradually, thanks in part to the singles "Save Tonight" and "Falling in Love Again," the album became a hit -- first in Sweden, then Scandinavia, then all across Europe. Desireless was picked up by Sony's Work Group division for American distribution, and was released in the summer of 1998. "Save Tonight" soon began a steady climb up the charts, and buoyed by support from the VH1 set, it eventually peaked in the Top Five. Cherry was red-hot, and Desireless went platinum in the States, selling a total of four million copies worldwide. In the summer of 1999, he appeared on Carlos Santana's vaunted comeback album Supernatural, singing the duet "Wishing It Was." Cherry toured the world in support of Desireless, and during the massive promotional jaunt his relationship dissolved. The breakup informed his second album, Living in the Present Future, which was released in Europe in 2000. Remixed for American release, the album was retitled Present/Future, sported a different running order with several different tracks, and wasn't released in the U.S. until late 2001. Despite the European success of lead single "Feels So Right," plus a well-received duet with sister Neneh on "Long Way Around," Present/Future didn't attract nearly as much attention in America as its predecessor. ~ Steve Huey, Rovi