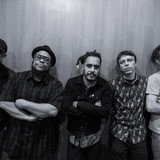 Pleading for the legalization of marijuana and supported by energetic performances that usually degenerated in violence, Planet Hemp's records went gold and platinum and they also performed with established hip-hoppers like the Beastie Boys and Cypress Hill. In 1993, Marcelo D2 and Skunk wanted to form a band, but they didn't know how to play or sing, so they opted for rap instead. But soon after the formation of Planet Hemp, they were joined by Rafael (guitar), Bacalhau (drums), and Formigão (bass), forging an eclectic mix of rap, rock, psychedelia, and hardcore, while their lyrics basically addressed the legalization of marijuana. As the object of their fascination, they took their name from a Canadian clothing brand advertised in High Times magazine. Recording just one demo tape, they departed for shows throughout Rio de Janeiro (Rio de Janeiro), São Paulo (São Paulo), Belo Horizonte (Minas Gerais), Curitiba (Paraná), and in festivals like the Juntatribo (Campinas, São Paulo) and Superdemo. They became more and more celebrated by the disenfranchised youngsters who attended the energetic, noisy, and aggressive performances that invariably ended in riots. Skunk's death in 1994 was a most tragic event that almost provoked the dissolution of the group, but he was replaced by Bê Negão's vocals, and soon they signed with Sony Music. In 1995, they released the CD Usuário and scored hits with "Mantenha o Respeito," "Legalize Já," "Fazendo a Cabeça," and the aggressive "Porcos Fardados" (criticizing the police's violence). The album affirmed their popularity and it went gold. Os Cães Ladram Mas a Caravana Não Pára (1997) also did very well, going platinum. As one may expect, their records have been apprehended, the band's members incarcerated, their shows canceled, and the group is frequently a part of the national news. ~ Alvaro Neder, Rovi