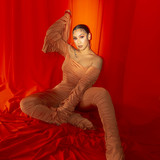 As a little girl growing up outside Detroit, Queen Naija started singing in church at the age of three and writing her own songs. Her focus shifted when she and her former husband found fame online with their wildly popular YouTube channel. But when their marriage fell apart, Queen returned to her lifelong passion and released a powerfully unapologetic single that shares her side of the story. Since first breaking through with her multi-platinum smash hit “Medicine,” Queen Naija has emerged as an unstoppable force in the R&B world. The Atlanta-based singer/songwriter further proved her massive appeal and tremendous talent on her chart-topping self-titled debut EP, a 2018 effort that soon earned her nominations for Top R&B Artist at the Billboard Music Awards and Best New Artist at the BET Awards. With the recent arrival of her full-length debut album “missunderstood,” she has cemented her status as one of R&B’s most compelling young stars, delivering a daringly honest body of work that’s undeniably timeless yet irresistibly fresh. Debuting at No. 1 on Billboard’s Top R&B Albums chart and in the top 10 on the Billboard 200, “misunderstood” expands on the emotionally charged songwriting Queen brought to her debut EP (a five-song project featuring three platinum-certified singles). Queen collaborated with heavyweights like London Jae, taking her time to dream up a smooth yet unpredictable sound that perfectly complements her full-hearted vocals and soul-baring lyrics.