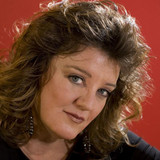 Beth Duncan is a California-based jazz singer and broadcast journalist. Her second album - Comes the Fall - received top honors in the 12th annual Independent Music Awards, and reached the top 40 on the CMJ jazz charts right below Diana Krall.

Duncan applies her warm, robust contralto to a collection of finely crafted tunes on her long-awaited third album, I’m All Yours, set for a July 24 release on Saccat Records. While the album’s ten tracks are an eclectic bunch, they are all the work of composer and lyricist Martine Tabilio, a friend of Duncan’s for over a decade. Saxophonist-flutist Jacám Manricks provides the arrangements and joins a band led by acclaimed pianist Joe Gilman, and featuring guitarist Steve Homan, bassist Matt Robinson, drummer Rick Lotter, and percussionist Brian Kendrick, to round out the Sacramento singer’s cast of collaborators.