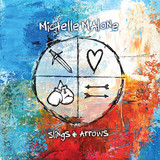 A singer, songwriter, and guitarist whose music is informed by blues, country, and roadhouse rock & roll, Michelle Malone's performances can go from contemplative and coffeehouse quiet to rowdy and "Twin Reverb on 10" loud at the turn of a dime, and her passionate, uncompromising style has won her a loyal following, especially in the American South. Michelle Malone was born and raised in Atlanta, Georgia, and her mother, Karyn Malone, was a single parent who raised her daughter with help from her own mother. Both Karyn and her mother worked as singers, playing a variety of night spots, jazz clubs, and resorts, and at an early age Michelle wanted to follow in the family tradition. At the age of 4, Michelle was singing in church, and by age ten she had taught herself to play guitar, drums, and saxophone. Michelle started her first band when she was 12, and soon began writing songs. After completing high school, Malone enrolled at Agnes Scott College in Decatur, Georgia, where she studied voice, but she soon began making herself heard on the Atlanta music scene, and in 1988 she released her first album, New Experience, issued by the independent Aluminum Jane label. Malone began playing out with her band Drag the River, and when Clive Davis happened to see Malone on-stage, she was signed to a deal with Arista Records. Released in 1990, Relentless was Malone's major-label debut, and it received enthusiastic reviews, and in 1991 Malone was part of an ad-hoc band, the Harshed Mellows (also including members of the Georgia Satellites and Tom Petty's Heartbreakers), who recorded a version of "U.S. Blues" for Deadicated, a Grateful Dead tribute album issued by Arista. But Malone soon became disenchanted with the constraints and image-making that came with life in the majors, and she and Arista parted ways. For her next album, Malone opted to go it alone, forming her own SBS Records label (standing for Strange Bird Songs), which released For You Not Them in 1992. After releasing a jazzy holiday-themed album in 1993, A Swingin' Christmas in the Attic, Malone partnered with Daemon Records, the label launched by Amy Ray of the Indigo Girls, longtime friends and mentors for Malone since her college days, for the 1994 album Redemption Dream, in which she debuted her new band, Band de Soleil. The album included the song "The Gathering," which helped inspire the popular fantasy card game Magic: The Gathering; also in 1994, Malone appeared in a TV commercial promoting tourism in Georgia that found her performing with Elton John. For her next album, Malone struck a deal with Velvel Records, which released Beneath the Devil Moon in 1997; the same label also released a live EP, Lucky to be Live, and the two titles were reissued on a single disc in 2009. After falling ill after a busy 1998 that included playing the Lilith Fair package tour and training for a marathon, Malone reactivated SBS Records for an acoustic-oriented release, Home Grown, in 1999. Malone stayed busy in the new millennium, releasing albums in quick succession -- 2001's Hello Out There, 2003's Stompin' Ground (with Malone backed by the Low-Down Georgia Revue), 2006's Sugarfoot, 2008's live set Sunscream, and 2009's Debris (which introduced another new backing combo, the Michelle Malone Banned) -- as well as continuing a relentless tour schedule (often playing 150 dates a year) and periodically issuing new installments in her Strange Bird series of authorized bootlegs. Friend and fan Shawn Mullins joined Malone in the studio to co-produce her 2012 effort, Day 2. The low-key Acoustic Winter was released in 2014, while Malone cranked up the volume again on 2015's Stronger Than You Think. A handful of fellow Georgia musicians came together to help Malone record 2018's Slings and Arrows, including Shawn Mullins, Joey Huffman (formerly of the Georgia Satellites), and Peter Stroud (who'd previously worked with Stevie Nicks and Sheryl Crow) When not busy with her own music, Malone also tours as an instrumentalist with the Kristian Bush Band, the solo project of the co-founder of Sugarland. ~ Mark Deming, Rovi