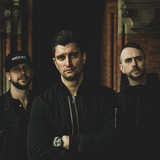 ColdTears is a metal band from Åstol / Gothenburg, Sweden formed in 2005 by guitarist David Johansson and vocalist Gustav Alander. The group began performing live in 2009 with their first major public appearance at Hultsfredsfestivalen (Hultsfred Festival). The band completed their first international tour in 2013 with several shows in Mexico.

The tour was a request of the Swedish government to share melodic metal culture originating in Sweden.