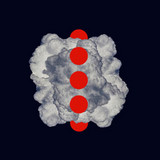 FM64 is an indie pop band of five founded in 2014. Their atmospheric music consist of recognizable guitar tones, catchy melodies and soft vocals performed by two soloists, Vilma and Mikael. The story of the band began in an apartment F64 in Tampere, where they wrote the first FM64 songs together. Since 2014, FM64 has frequently released new music, and played tens of gigs around Finland gathering an active fan base. Savua, a debut album of FM64 was released in May 2019. The album was mentioned twice in major music medium when Soundi published an interview with FM64. The first review was released by Kaaoszine a little later. The links to an interview and review are attached below. The singles of the album "Trampoliini", "Paska Kesä" and "Jos tulisit mukaani " were each noticed either on Spotify editoral playlists or by national radio station YleX in 2018 and 2019.To find more about them or their upcoming gigs, please visit a website www.fm64.fi or check their social media pages on Facebook (FM64) and Instagram (fm64). Interview (05/2019): https://www.soundi.fi/soittolistat/ehka-se-jollain-tavalla-kuvastaa-paluuta-kotiin-parasta-juuri-nyt-soittolistan-vieraana-debyyttilevynsa-julkaissut-fm64/ Review (05/2019) https://kaaoszine.fi/fm64n-debyyttialbumi-savua-on-tyylikkainta-ja-laadukkainta-kotimaista-pop-rockia-pitkiin-aikoihin/