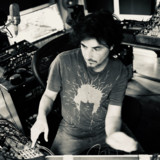 Amon Tobin’s life and work in electronic music has produced some of the most important, era-defining records of his time and has helped to shape much of what has come since. The development of his productions bore out the modern classics Bricolage, Permutation, and Supermodified. Foley Room then launched the definitive sonic expedition towards 2011’s ISAM album. ISAM paved the way for a radically new kind of audio-visual performance. The landmark experience was hailed as a raising of the bar for live production the world over. Sell out shows followed everywhere from the Sydney Opera House to the Olympia in Paris to the Roundhouse in London, LA’s Greek theatre along with headline festival stages including Sonar, MUTEK and Coachella. Amon spent eight years developing a series of works under different aliases, alongside the material under his own name. These are now gradually being unveiled on the Nomark label. 2019 saw the release of Fear in a Handful of Dust and Long Stories.

The first new alias Only Child Tyrant saw its debut Time to Run in the same year. In 2020 the long-awaited Two Fingers album Fight! Fight! Fight! was released to widespread acclaim and the Figueroa alias was revealed with an album, The World As We Know It, which was broadly hailed as an “album of the year” by published critics. His long established reputation for musical ingenuity is unconfined by genre, and he remains one of the most visionary electronic artists of his generation.