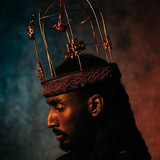 HENO. is the unapologetic nomad whose journey of self-actualization has led to the rupture of musical boundaries with an electrifying new sound he calls

‘Alternative Soul’. His pioneering sound whisks his love for Hip-Hop, Motown/Soul, R&B, Alternative, and Experimental music, together in a way that allows his fans to take a peek into the artist that is HENO. The first generation Ethiopian American’s love and passion for music began in Takoma Park, Maryland, where he was born and raised. Growing up, music wasn’t necessarily something that was encouraged by his family. These circumstances led to HENO. spending large amounts of time both listening and studying music theory on his own. It was his love of music that liberated him from the destructive path that so many of his peers chose to take. Going against the grain caused his peers to view HENO. as an outcast, and these early experiences allowed him to embrace being different as well as become comfortable veering from the norm. These foundational values HENO. learned as a youth would hold to be critical in helping craft his sonic universe and understanding the chaotic world around him.