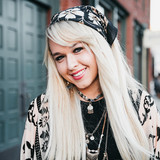 Christie Huff is a country singer songwriter who brings a touch of pop to her soulful sound. She's an LA girl now, but attributes her country background to her childhood in Arizona. Consistent trips to Nashville to co-write with other country songwriters keep her country ties strong. She is currently working on releasing singles consistently. Christie is well-known in LA and Orange County, and she now performs her original songs both acoustically and with her band. Her latest release ‘Halfway Fell gained over 1 million Streams in it's first 6 weeks, while her prior release 'Black and White' is at a lifetime stream count of 3 Million. “Black and White”. Her songs have been featured on many high-profile playlists including: New Boots, Hot Country and Wild Country. Christie not only has had success in the streaming world, but also in her live performances. She has gotten to open up for some of the biggest names in country music. Those artists include Jason Aldean, Billy Currington, Kip Moore, Toby Keith, and Bebe Rexha. Christie splits her time between LA and Nashville and is active in both performing and writing. She was recently featured on 'The Ty Bentli Show' giving a 10 Minute Tune about Super Bowl 54 Commercials. Her first full band show was at the famous Whiskey Jam, where her music was met with great acceptance.