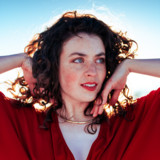 Sally Louise is an indie-folk singer-songwriter with poetic lyrics and melodies evocative of Joni Mitchell , Weyes Blood , and Maggie Rogers .

Drawing from her own experiences, she crafts reflective lyrics and captivating melodies to create an atmosphere that envelops her audience. She has found inspiration in the folk movement of the 60s and 70s, the strophic folk tradition, as well as contemporary lofi and sound sampling. After a decade performing opera across the US and Europe, she has returned to songwriting - the art form that made her want to be a musician from the age of 12. Since debut single, Milky Blue - which was released in July 2020 - she has been featured in Floated Magazine, Rochester City Magazine, and performed in the international CommUNITY Arts & Wellness Festival. Her debut album, My Hands Are On Fire, which will be released May 14, 2021, is a reflection on finding balance within the duality of the self. Questioning what it means to be a spiritual being in a physical form, embodying both the divine feminine and masculine and holding onto a sense of self within the confines of an abusive relationship are explored in her lyrics and compositions.