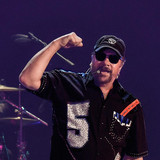 Whose music has been featured at EVERY major sporting event in the world including the Super Bowl, World Series, Conference Championships, The NBA, Collegiate Bowl Games National Championship Games, the NASCAR racing circuit and championships, The World Cup, The Indianapolis 500, The Kentucky Derby, EVERY Holiday Parade include the famous Macys Thanksgiving Day parade and the Tournament of Roses Parade, Political Party Conventions, Presidential Campaigns, and nearly EVERY wedding, confirmation, and bar mitzvah in the world? Whose music has been featured on more than 200 motion picture film soundtracks? He has been called the "Founder of the Dance Revolution." He is Harry Wayne Casey, better known as the founder and leader of KC and The Sunshine Band. The music that got people out of their seats and onto the dance floor originated with humble beginnings in Hialeah, Florida. KC has never moved farther than 10 miles away from his birthplace and the birthplace of his legendary music underlines the fact that he is proud that his "Sunshine Sound" has flourished continuously for over 37 years. The "birth" of KC and the Sunshine Band would not only bring the world legendary music, but influence a whole generation. From clothing to hairstyles to dance styles to new acceptable words in the English language. Four Number one Records in a row, Grammy Awards, Peoples Choice Awards, American Music Awards, and the focus of the music world became Miami, Florida.