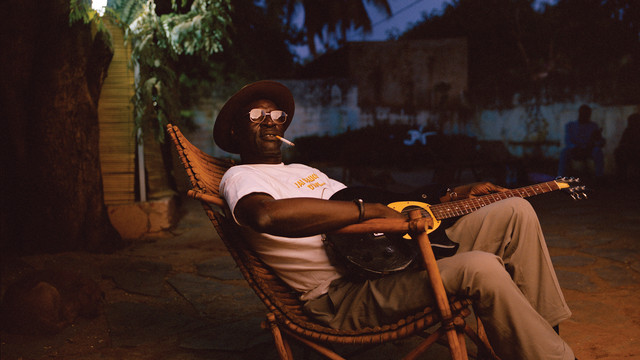 One of the most internationally successful West African musicians of the '90s, Ali Farka Touré was described as "the African John Lee Hooker" so many times that it probably began to grate on both Touré's and Hooker's nerves. There is a lot of truth to the comparison, however, and it isn't exactly an insult. The guitarist, who also played other instruments such as calabash and bongos, shared with Hooker (and similar American bluesmen like Lightnin' Hopkins) a predilection for low-pitched vocals and midtempo, foot-stomping rhythms, often playing with minimal accompaniment. Touré's delivery was less abrasive than Hooker's, and the general tone of his material somewhat sweeter. Widespread success on the order of Hooker was somewhat elusive, though, as Touré sang in several languages, and only occasionally in English. As he once told Option, his are songs "about education, work, love, and society." If he and Hooker sounded quite similar, it's probably not by conscious design, but due to the fact that both drew inspiration from African rhythmic and musical traditions that extend back many generations. Touré was approaching the age of 50 when he came to the attention of the burgeoning world music community in the West via a self-titled album in the late '80s. In the following years he toured often in North America and Europe, and recorded frequently, sometimes with contributions from Taj Mahal and members of the Chieftains. In 1990, Touré retreated from music entirely to devote himself to his rice farm, but was convinced by his producer to again pick up the guitar to record 1994's Talking Timbuktu, on which he was joined by Ry Cooder. It was his most well-received effort to date, earning him a Grammy for Best World Music Album, but it was also proof that not all Third World-First World collaborations have to dilute their non-Western elements to achieve wide acceptance. However, Touré found success draining and again retreated to tend his farm. He didn't release a record on American shores for five more years; he finally broke the silence in 1999 with Niafunké, which discarded the collaborative approach in favor of a return to his musical roots. Then, once again, Touré stepped away from the limelight. In 2005, perhaps partly to keep his name familiar to music lovers, Nonesuch issued (for the first time on compact disc) Red & Green, two albums Touré recorded in the early '80s, packaged together as a two-disc set. In the Heart of the Moon was also released in 2005. Touré died on March 7, 2006, from the bone cancer that he had been battling for years; however, he was able to complete one last album before passing. His final album, Savane, was released posthumously in July 2006. It was later discovered that he had completed impromptu sessions a year before his death alongside Malian kora player Toumani Diabaté in London. The results of these sessions were released in the simply titled 2010 record Ali & Toumani. ~ Richie Unterberger, Rovi