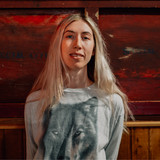 Jo Schornikow is an Australian songwriter with a voice like water. Her debut album on Keeled Scales is called Secret Weapon. It's a record of time; of place; of circumstance made in Jo’s hometown of Melbourne with VCA college buddy Shane Byron on a setup she refers to as “really dinky.” Jo’s history is rich with unexpected circumstances. She began as a church organist and jazz pianist, which took her from Melbourne to New York City. She played with a cast of colorful creatives, and also accompanied Hugh Jackman and Lana Del Rey, as well as contributed keys to The National, Kelli Scarr, and Phosphorescent, who she's been a touring member of for over 5 years. With partner Matthew Houck, Jo had two children in quick succession. The shift influenced and restricted the music she shares today. She admits that for her motherhood was not the immediately satisfying splendor so many describe. Wonder, fear and compromise became omnipresent. But Secret Weapon pours from a deeply situated place of profound quiet, a place of restraint, contemplation, and healing. Jo's songs thrive in a dusklit territory neighboring pop, shoegaze, and ambient experimental music. Among subtle swells of synths and shimmering washes of guitars, her serene voice is never obscured. It's a quiet, slow burning beauty. A sonic exploration of joy, discomfort and mystery, with undercurrents of strength and hope; it's a secret weapon.