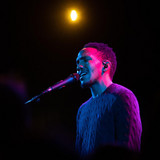 @jukeross -- A singer/songwriter with a dusky warm voice and an infectious spirit of affirmation, Juke Ross hails from the country of Guyana in South America's northern coast. Ross initially sought into a career in medicine before the desire to become an artiste took hold. Picking up the guitar during his med school days, Ross began writing heartfelt, thoughtful folk-pop songs, one of which, the breezy "Colour Me," quietly began to pick up steam on digital platforms. Not long after on extended trips to New York came a string of singles including “Fresh Roses", "Burned By The Love", "Sophia" and a sophomore album "Chapter 2".