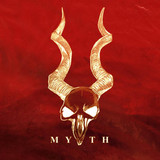 MYTH are a four-piece alternative rock band from Dublin. Their music consists of low-end rhythmic harmonies, fat- back beats and haunting vocal melodies. Over the past 2 years the band have been tearing up Ireland’s Alt-Rock scene selling out numerous shows in different venues including The Workman’s Club , The Underground & Whelan’s. Having released their self-titled debut EP in 2020 the band received critical acclaim from numerous media outlets across Ireland, UK, and Europe. Their Most recent release Oh, La perfectly sums up what the band are trying to produce within their sound & the music video has been nominated for an MMV award. Recently they played at Live At Heart Newfoundland and have had TWO back to back SOLD OUT shows in The Button Factory Dublin. They will be performing at this years ASEAN Music Showcase festival and are currently working in the studio on their highly anticipated second EP “writing music that brings rock back to its true fighting spirit.” - HOTPRESS.IE “The brooding, haunting vocals of Alex Webb are ably supplemented by a thundering bass line and some really top-notch grungy axe-monstering by the rest of the band”- JOE.IE “this can be heard within their sound, which is a mixture of Jefferson Airplane, The Cranberries, Fleetwood Mac & Paramore.”- XSNOIZE MYTH are: Alex Webb - Vocals, Violin Gavin Wynne – Guitar Gary Norman - Bass Tiarnán McCarville - Drums All booking inquires to mythmusicofficial@gmail.com