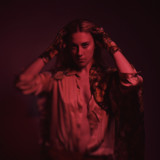 TORRES’ fifth album Thirstier pumps the miraculous into the mundane. It is in open revolt against the gray drag of time, a searing and life-affirming eruption of an album that wonders what could happen if we found a way to make our fantasies inexhaustible. What if we got whatever we wanted and still wanted it, endlessly, with no threat of boredom and no danger of depletion? What could we become if we let ourselves grow incandescent with eternally renewing desire? Since releasing her self-titled debut album in 2013, TORRES—the stage name of Brooklyn-based rock musician Mackenzie Scott—has used her pointed lyricism and disarming vocal presence to seek openings in the everyday, prying apart the walls of the real in search of escape. After a pandemic year that toggled relentlessly between numbing dread and active terror, Thirstier explodes the borders of imaginative possibility. It is Scott’s most exuberant and daring record to date, showcasing her in thrilling freefall.